It’s all in the name

Where Did I Get It?

After I was thrown into the unexpected realms of redundancy from my job in corporate land of 15 years, with only 2 weeks’ notice, the decision to work for myself didn’t take long. It was something I always wanted to do and I worked out that I’d provide virtual marketing support and admin assistance to time short business owners. My why? I wanted the flexibility to work around my family. I wanted to be able to spend as much time with my children as I could.

I spent ages brain storming ideas and names with myself and came up with lots of ideas. I’d decide “yep I like that” and do the research only to find that someone else had registered a business under that name and so I’d be back to the drawing board. This happened quite a few times. I tried play on words and even registered the name Virtjul. I then decided I didn’t like that and considered just using my name like many other VA’s Julia Reedshaw Virtual Assistant. Too boring and too obvious. I’d also read though the downside with that is that if you decide to sell your business then no one would want to buy it!!

I quickly wrote off that idea as I wanted something that had meaning. Something that I hoped would grab attention, not just by the name but also a name I could apply to a logo that would hopefully build a strong personal brand and sit with my own personal values.

Eventually the penny dropped! Watching some trash TV one night, probably Emmerdale, it came to me!  I had to play around a little with it but I got there and Purple Violet Business Support was born!

The name was right under my nose, so to speak. Simple as it is purple is my favourite colour and always has been for as long as I can remember and Violet is the flower that represents the month I was born – February!!!!  Violet also happens to be the name of my late Great Grandma and therefore it carries very personal and emotional sentiment.

What I also love about the Violet as a flower is it has heart shaped leaves. I love hearts. I’m not sure if it’s because I’m a bit of a romantic but I just love hearts!!! You will find hearts represented everywhere in my life. They hang in my home, a lot of my jewellery has hearts on it, I have clothes with hearts on too and when I doodle I doodle hearts!!!

The Ancient Greeks actually considered the Violet a symbol of fertility and love; they used it in love potions!!! I can’t admit to making potions though…….

It Was Meant To Be!

I began to look a bit deeper to establish the meaning behind the flower and colour purple. I found so many things that just aligned with my personality. It was just meant to be!!  By now I loved the name and was sticking with it anyway. 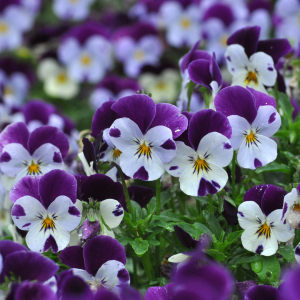 Violets are described as “inspiring symbols rising above challenges”. Violets thrive in the toughest conditions and bring dignity and power to humble places. Well for those of you that know me, you’ll know that the past 10 years of my life has seen some major challenges and I think this represents just that. The challenges I have faced in the past have made me stronger, allowing me to deal with those at hand.

The colour purple has origins tied to royalty and ceremony and purple flowers not only represent dignity but pride and success. Violet/purple is a magical colour which also represents by my birth stone Amethyst. Bringing a feeling of romance it also is great for calming the nerves and lifting your mood. It symbolises spirituality and is commonly associated with signs of wealth and elegance. It also brings vibrant creativity, believed to influence and encourage us to show empathy and love seeking dignity and self-respect.

Reading all this, just reconfirmed to me I had made the right choice. The most important representation of it’s meaning though is faithfulness, loyalty and watchfulness.

If you are still at the early stages of setting up your business and are struggling to come up with a name, here are some tips for doing just that www.inc.com/neil-patel/how-to-come-up-with-the-best-name-for-your-brand.html

Should you need any help with choosing a name or you need a sounding board for your latest project I’m happy to help. Please get in touch: jules@purplevioletva.com

Some Interesting Stuff About The Colour Purple

We use cookies on our website to give you the most relevant experience by remembering your preferences and repeat visits. By clicking “Accept”, you consent to the use of ALL the cookies.
Cookie settingsACCEPT
Manage consent

This website uses cookies to improve your experience while you navigate through the website. Out of these, the cookies that are categorized as necessary are stored on your browser as they are essential for the working of basic functionalities of the website. We also use third-party cookies that help us analyze and understand how you use this website. These cookies will be stored in your browser only with your consent. You also have the option to opt-out of these cookies. But opting out of some of these cookies may affect your browsing experience.
Necessary Always Enabled

Performance cookies are used to understand and analyze the key performance indexes of the website which helps in delivering a better user experience for the visitors.

Analytical cookies are used to understand how visitors interact with the website. These cookies help provide information on metrics the number of visitors, bounce rate, traffic source, etc.

Advertisement cookies are used to provide visitors with relevant ads and marketing campaigns. These cookies track visitors across websites and collect information to provide customized ads.

Other uncategorized cookies are those that are being analyzed and have not been classified into a category as yet.